Einstein thought “Combinatory Play” was the secret of genius and the essential feature in productive thought.

“Combinatory Play,” he says, comes about as a result of the collection of cross-disciplinary building blocks we amass — knowledge, memories, bits of information, sparks of inspiration, and other ideas — and then combine and recombine. The process occurs  mostly unconsciously, and results in something “new.”

We build an infrastructure of  “own” “original” ideas.

END_OF_DOCUMENT_TOKEN_TO_BE_REPLACED

An estimated 5,000 people explored South MS in Lawrence, KS in August to participate in activities, presentations, hands-on workshops and exhibits designed to spark creativity at school, in the home and the workplace.

Among the Nerdy Derby, robots, drones, pirates and about a million of other activities and presentations, Strategically Playful created collaborative art experiences for all ages.

One aspect challenged kids to be generously kind art critics on anonymous art.

Find out about next year’s festival of creativity on Facebook.

I got a ton of attention at this year’s Maker Faire because of the giant bubbles I created.

Most of that attention was to get the recipe so people could enjoy making them at home.

I don’t know what the magic ingredient is that makes them so colorful, but I do know what helps make them large and long lasting. I’ve eliminated glycerin and guar gum from the mix, as well as any dishwashing liquid besides Dawn (it is the most biodegradable as far as I can tell).

END_OF_DOCUMENT_TOKEN_TO_BE_REPLACED

Neuroscientist Charles Limb conducted a study several years ago out of Johns Hopkins University to measure the creative process in the brain. In his TED talk, he describes the experiment he designed that measured the brain activity of jazz pianists. He used an fMRI machine while they improvised on a MIDI keyboard. He monitored two parts of the brain: the medial prefrontal cortex (MPC) and the dorsolateral prefrontal cortex (DLPFC).

To define the parameters of the study: the medial prefrontal cortex is associated with self-expression (it’s like a mental narrator that keeps tabs on the story of your life) and the DLPFC is associated with impulse control (it edits your thoughts and words, and makes you think twice before yelling at your boss).

END_OF_DOCUMENT_TOKEN_TO_BE_REPLACED

“If you are afraid of failure, you won’t try anything new,” says Tina Seelig, Executive Director of Stanford University’s Technology Ventures Program.

At the other end of the spectrum is play, which minimizes consequence, is fun,

is purposeful, is action oriented and players have a positive mindset.

Tim Brown, CEO of IDEO, thinks playfulness helps them get to better creative solutions, helps them do their jobs better, and helps them feel better when they do them. Matt Weinstein at Play Fair says “If you’re having fun at work, the stress level goes way down, there’s an increase in morale and creativity, and customer satisfaction goes way up. ….because people like to do business with people who like to do business.”

A mantra at IDEO is “fail often to succeed sooner.”

END_OF_DOCUMENT_TOKEN_TO_BE_REPLACED

Play at the Chalk Walk at the Concourse Park Fountain 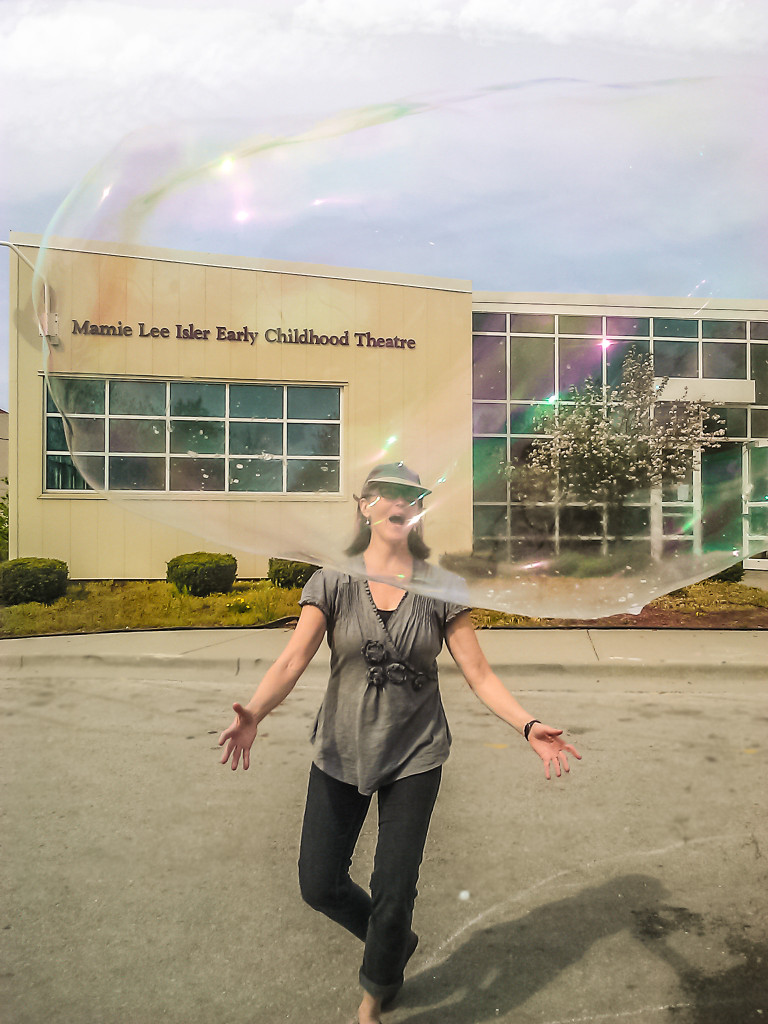 Everyone seems to love the bubbles that are created from ordinary dish soap, but kids seem to love them with wild abandon.

I’ve been creating an opportunities for kids to chase, pop, blow, watch and play with giant bubbles at different places around Kansas City, including at a Mamie Lee Isler Early Childhood Theater community event and the Chalk Walk at the Concourse Park Fountain.

I’ve been exploring recipes and methods to make the bubbles as large as cars and sometimes, city busses.

The picture at right is from an event I did with Stone Lion Puppets a few weeks earlier.

How to Live your Most Creative Life

Tracy Letts (author of “Osage County”) shares his top ten ways to become the most creative self in this video. His ideas here are a bit …creative, so probably don’t listen at work (unless you work by yourself, at home, alone).
Ultimately his tactics are methods to get out of your own way (“allow what already exists to be”) and allowing creativity to exist.(Interesting: this is exactly what David Kelley, founder of IDEO, says is the key to unlocking creativity.)